ClearCorrect vs Invisalign: The Pros and Cons 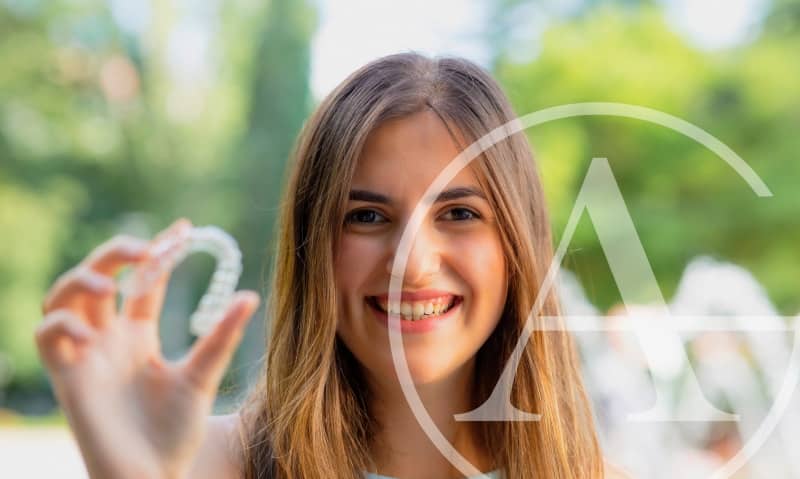 Learning the differences between ClearCorrect vs. Invisalign

When they first came out over 20 years ago, Invisalign clear aligners transformed orthodontics, making it possible to straighten your teeth without many of the downsides of traditional braces. Clear aligners straighten your teeth discreetly, without anyone else noticing, which allows you to continue looking professional and feeling confident throughout your treatment. Plus, unlike braces, clear aligners are removable, eliminating the need for you to cut out certain foods like you do with braces. Clear aligners are convenient, comfortable, and incredibly effective, and that has led to a boom in their popularity.

Over the years, more and more brands of clear aligners have become available, giving you more options than ever. Having access to these options is good on the one hand. For instance, competition in the market place helps ensure ongoing improvement of clear aligners. On the other hand, it can be dizzying to try and figure out what’s the best clear aligner treatment option for you. To help you get a bigger picture, we’ve compared two of the most popular options: ClearCorrect vs. Invisalign.

Invisalign was the first type of clear aligner on the market, making it a trailblazer. Even over 20 years later, it remains the top and most recognizable aligner brand out there, treating 13 million people around the world. Invisalign aligners are FDA-approved and are now made from a clear, patented material called SmartTrack that was designed by Align Technology, the company behind Invisalign, specifically for the aligners.

Due to its unique properties, it is thinner and fits more securely than other plastics, and the fit is reported to be more comfortable. Another notable benefit is that this material doesn’t contain any gluten or latex and is BPA and BPS-free.

Invisalign offers several treatment plans to ensure that you can choose a plan that meets your needs. A couple of these plans provide a limited number of aligners to correct minor malocclusions at a lower cost, with the smallest plan including only five aligners and a mid-range plan including 10. It then expands to the much more standard Invisalign Full plan, which includes as many aligners as you’ll need during your treatment process. Invisalign also offers a specialized plan for teens that comes with a nondescript blue dot on them, which is there so parents can quickly and easily confirm that their child is wearing their aligners.

What are their similarities?

At the end of the day, Invisalign and ClearCorrect have a lot in common, both when it comes to their appearance and the way each treatment process functions. Dentists don’t need to be orthodontists to provide either Invisalign or ClearCorrect, but both aligner providers require the dentists who provide them to complete specialized training courses to ensure that they can provide patients with stunning results. During your treatment with either type of aligner, you’ll visit your dentist regularly—usually at least every six weeks—to ensure that your teeth are moving as predicted and on schedule.

You’ll also need to wear your aligners for at least 22 hours a day, taking them out only to eat, drink anything that isn’t water, complete your oral hygiene routine, and for the occasional special event. Invisalign and ClearCorrect both have the option of tooth-colored attachments to help correct more severe malocclusions. These attachments make the aligners slightly more visible, appearing more like clear braces, but many people still won’t notice them. The treatment time for both aligners varies depending on the severity of your case, but they both last an average of 12 to 18 months.

What are their differences?

Most of the differences between ClearCorrect and Invisalign come down to the materials that they are made from. SmartTrack makes Invisalign aligners a little thicker and more flexible than ClearCorrect aligners, which are also more opaque than Invisalign. That thickness and flexibility tend to make Invisalign a little more durable.

What are the advantages and disadvantages of each?

Aside from these factors, the aligners themselves have a lot of the same advantages and disadvantages. One of the major advantages that both Invisalign and ClearCorrect have over at-home clear aligners is that they’re done with the oversight of a dentist. This does mean that you’ll spend time visiting your dentist about every six weeks, but you benefit from your dentist’s experience and get more personalized treatment with more predictable results.

Because of their similarities, a lot of the advantages and disadvantages of ClearCorrect vs. Invisalign come down to the treatment plans themselves and the costs of those plans. In general, ClearCorrect is slightly less expensive than Invisalign, but this isn’t always the case. Invisalign’s smallest plan starts at an estimated $1,500 compared to the $2,000 starting price of ClearCorrect’s smallest plan. Which plan you need will depend entirely on your individual case, and the discussions you have with your dentist. Most people will need something more than the smallest plans available.

How does Dr. Alhadef determine which clear aligners are best?

Dr. Alhadef has used both of these products in the past and has come to the conclusion that the advantages and treatment results of Invisalign outweigh the advantages of ClearCorrect. Also, he has found that he’s quite good at being able to predict whether someone will benefit from a shorter-term or longer term Invisalign package. That’s why he now exclusively offers the gold standard of clear aligners that have remained the top-performing aligners for over 20 years—Invisalign.

So if you’re ready for a straighter, more confident smile, and you’re ready to talk to the best dentist in Dallas, TX, feel free to schedule a consultation with Dr. Alhadef at any time.